The curious case of St Trinians 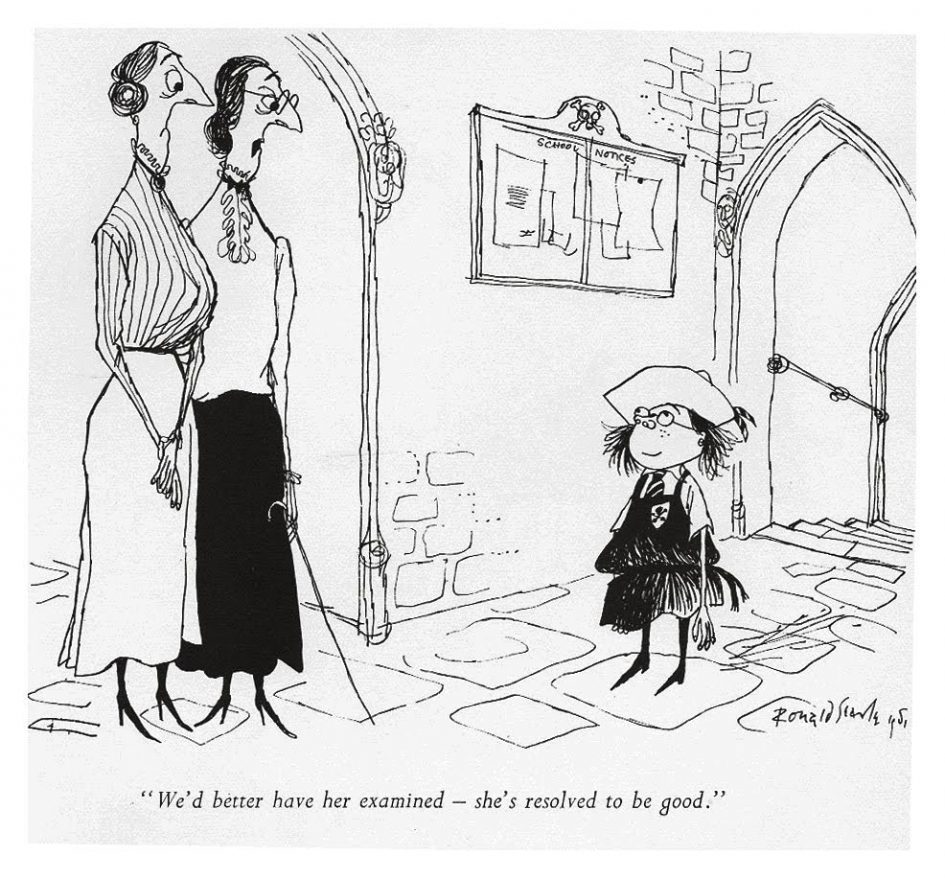 This is where I show my age. Okay, I’m not that old, but do you remember the fabulous St Trinians films? The Belles of St Trinians, Blue Murder at St Trinians, The Pure Hell of St Trinians and the Great St Trinians Train Robbery. Basically all about adventures involving a boarding school for girls where things seem definitely a little out of control. The first one filmed in black and white in 1954 with the great Alastair Sim playing both the headmistress Miss Fritton and the headmistresses twin brother Clarence. There were a couple of more recent remakes. Anyway, this is where the fun begins as I discovered the St Trinians films had close links to some educational research I was carrying out.

The St Trinians films are based on the St Trinians cartoons by Ronald Searle, but what most people don’t know is that he based this on tales while staying Kirkcudbright, Scotland on tales regaled to him by his neighbour’s teenaged daughters, Cécilé and Pat Johnston, when they came home in the holidays about their time at school. An academy for young ladies in Dalkeith Road, Edinburgh called… St Trinnean’s (Gosling, 1998; Goodwin, 1998 and Searle, 1959). However, St Trinnean’s was no ordinary school and one of the reasons the girls came home with such interesting stories, because St Trinnean’s was one of a few schools that implemented a self-regulated learning (SRL) pedagogical approach to education. In this case a modified version of the Dalton Plan and how I came across the story.

St Trinnean’s itself was founded in 1922 by Miss Catherine Fraser Lee. Named after the Gaelic for St Ninian as Miss Fraser Lee had a passion for Scotland’s Celtic past, it also had the Gaelic motto “Solus agus Sonas” (meaning “Light and joy”).

Originally the school was located at 10 Palmerston Road, Edinburgh with an intake of 60 girls. It was also open to boys upto the age of 10. In 1925 it moved to larger premises at St Leonard’s House off Dalkeith Road but with the outbreak of war in 1939 the school was evacuated to Gala House, Galashiels. The school closed in 1946 after Miss Fraser Lee’s retirement (MacGregor, 2007; Goodwin, 1998; Dick, 2007).

So where did St Trinian legend come from? It certainly wasn’t the uniform and the headmistress was quite strict. Girls had to sit up straight, with legs together and uniform was also checked. Although there was no gym uniform, PE was done in knickers without the slips. Girls had to be wearing the right kind of knickers which had pockets and had to be bought from Jenners, the only store that supplied them (Dick, 2007)

However, the school was different. VERY different. Based on the Dalton Plan, pupils were largely responsible for their own progress and discipline was more ‘self-imposed’ rather than school-imposed (Dick, 2007). The rules and regulations were not established by the staff, but instead set out by a senate made up of senior students who also decided what punishment, if any, would be meted to unruly fellow pupils. These progressive methods, some of which bordered on the bizarre, such as the term pupils had to eat their meals backwards starting with pudding and ending with soup, led to St Trinnean’s acquiring a reputation as “the school where they do what they like” (MacGregor, 2007). And it’s probably these tales that Searle heard and based his cartoons on.

“It was in January 1941… that the name ‘St Trinnean’s’ first rang in my ears and I’m afraid that it all goes to show what can happen to an innocent and unsuspecting boy of 21, far from home, lost in the fleshpots of Kircudbright, when he is invited in for a slice of haggis, a steaming cup of Glenlivet and [underlined] allowed to hold the daughters of an Edinburgh family, who were pupils at St Trinnean’s, to boot….

…. I won’t embarrass our Cecilé (one of those daughters) any further, except to say that the kindness, generosity and hospitality that the Miles Johnston family gave to a young soldier then, will always remain for me as a representative of everything that is best of Scotland of the Frazer[sic] Lee-St Trinnean’s spirit.”

However, St Trinneans was progressive and ahead of its time, along with a handful of other schools in the UK (Bryanston, King Alfreds School, Tiffin School and Streatham Secondary School later to become Rosa Bassett School (Lee, 2000; Stewart, 1968; van der Ploeg, 2012). As with these other schools, teaching was organised along the lines of the Dalton Plan, a form of self-regulated-learning, where pupils took progressive control of their own learning and organised their own homework schedules (Campbell, 2007). It was also not a high-pressure environment, with pupils being told before higher exams to go home without books and refresh their minds at the theatre (MacGregor, 2007).

Although Campbell (2007), a former head girl, felt the school was not very good for education, she notes that “What it did leave you with, though was a sense of responsibility and duty.” and that many former pupils went onto lead very successful careers. Former pupils going onto successful careers was also reported by others; MacGregor (2007) noting that the school was attended by many of the city’s good families including the Danish consul and despite the environment not being high-pressure girls achieved and went onto good things. Jean Wallace the first woman to pass the final examination of the Society of Accountants in Edinburgh with distinction was a St Trinnean’s girl. Others like Dr Joan Campell went onto distinguish themselves in medicine and law.

Even more remarkable perhaps for females to be achieving so much in those times in a male-dominated workforce (Anitha and Pearson, 2013). How much this was a legacy of being taught under the Dalton Plan and the additional benefits it brought and/or the result of the societal, socio-economic background of the pupils is open to question.

With the school closing in 1946, perhaps it is not surprising the real school and the educational ideas it stood for are no longer remembered for what they were but instead, the popularity for the rather embellished ideas and tales Searle portrayed in his cartoons.

'Edited theme based on 'baskerville'